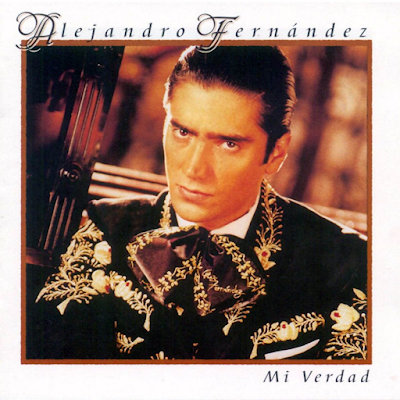 In the summer of 1999, when Enrique, Jennifer, and Ricky were having their big pop crossover moments -- we've just heard "Bailando," "No Me Amas," and "Livin' La Vida Loca" -- their generational peer Fernández was playing a longer game, wearing an elegant charro outfit and a serious look on the cover of his seventh album Mi Verdad. He had already had his Hot Latin crossover moment thanks to the Estefans and their crowd, and was apparently uninterested in making a play for the larger gringo audience; Mi Verdad was an album of pura ranchera, if not as rowdy or working-class as his father used to make, then still reverent of tradition and aimed at the Mexican and Mexican-American audience that could be depended on to know the difference between a beachy flash-in-the-pan and a true artist.

And that audience responded. "Loco" was #1 for a week, and while that's a much shorter lifespan than any of his previous #1s had enjoyed, "Loco" is the best song, the best production, and the best performance, he'd sent there yet. The unwavering rhythm set by the vihuela (miniature guitar) creates an obsessive, relentless atmosphere, layered over by picked guitar filigree, Fernández' intensely controlled and impassioned vocal, semi-ironic Bacharachian trumpet puffs, and one of the most glorious string charts it's been my pleasure to hear in this travelogue. When that string section saws in repetitive Psycho fragments at the end of the chorus, it's one of the great unions of production and lyric.

Because, of course, the song centers on Hitchcockian subject matter: psychotic breaks, sexual obsession, and sublimated violence. He talks to the birds; he's convinced she loves him on the slenderest of evidence, he sees her eyes shining at him over his sheet when he wakes up; he's waiting for her skirt to fall in the streets. It's entirely possible to read it as merely a particularly florid love song, since Fernández doesn't overplay his performance (at least not within the tradition of ranchera, which often goes far more florid than this on much meager grounds), but those alternately swooping and sawing strings give the game away: this ain't Patsy Cline.
Posted by Jonathan Bogart at 29.2.16