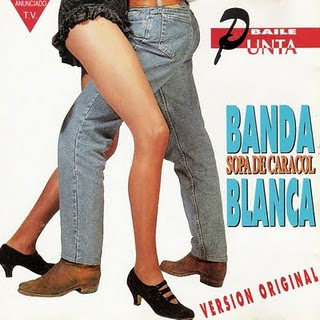 Ahh, at last. Entries like this one make me regret my decision to not copy Popular in all things and refrain from giving scores; if ever there was a first 10-out-of-10 begging to be given out, this was it.

Of course there's personal history here, as there should always be with a 10.

In the summer of 1990, when I was twelve, my family moved from Arizona to Guatemala so that my parents could be missionaries in the most heavily missionized country in the Western Hemisphere. Apart from several months at language school, where I learned Spanish largely by immersion, I never really identified with, participated in, or even felt comfortable with the local culture. Part of this is because I was a shy, introverted kid and would have felt just as out of place anywhere, but part of it is because I went to an English-language school, surrounded by other missionary kids, listened to the English-language stations on the radio, and spent my teens living what I now recognize as an extremely privileged, even colonialist lifestyle, in which the only regular contact I made with Guatemalans was as servicepeople. That old colonialist's line, "lovely country, pity about the people," would have disgusted me if I'd heard it spoken aloud, but I almost never conducted myself in any way that would have contradicted it.

So when I say that this song is the first song in this travelogue so far that I knew at the time, I don't want to be misunderstood. I didn't hear it as pop, the way I heard "I Love Your Smile" and "Mr. Wendal" and "Runaway Train" on the radio, hoping and waiting around for them to come on, knowing who it was sang them, having an opinion about their relative merit as compared to everything else on the radio — I heard it as background noise, as the kind of thing that would be played on outdoor speakers during Sundays in the parque central, or at the occasional saint's-day fiesta to which we ventured, excited and a little nervously, and possibly as one of the videos which washed over me in undistinguished mass on the fuzzy local music-video channel while I waited for the English-language hour to come on.

Nevertheless, that horn line, that rhythm, those Garifuna shouts — "iupe! iupe!" — and most of all, that stutter-and-release of a refrain, chanted irregularly throughout the song, are so deeply embedded in the back of my mind that it functions in much the same way as pop music does for those lucky enough to have grown up with it (before my parents were missionaries, they were very strict about what we listened to), as an invisible presence clouding and coloring an entire portion of your life, something you never consciously sought out but nevertheless know intimately, like family or home.

That refrain — "si tú quieres bailar... sopa de caracol! jey!" (tr. "if you want to dance... conch soup! hey!") — is if possible even more meaningless than the rest of the "lyrics," which mostly aren't in Spanish but in the Garifuna language of the Caribbean coast of Central America. It's a rare example of a Central American hit that, however briefly or novelty-like, stormed the rest of Latin American pop for a season. But while I don't suppose it left much of a trace on the Billboard Hot Latin chart, where it reigned at the top for only two weeks, it was more or less a standard in Guatemala for years, a hip-moving guaranteed dancefloor-filler that I clearly remember hearing in 1996, as we were preparing to move back to the States, and being surprised by how familiar it was since I never listened to Spanish-language music.

My six years in Guatemala were spent almost entirely inland, so I don't know much about Garifuna culture beyond what I gather from Wikipedia, but I will state for the record that this is not salsa or merengue, despite the similarity of a tropical rhythm with horns, but punta, the Central-American coastal dance music which moves in tighter circles and sounds (to my not-very-educated ear) more like the chant-like indigenous folk music I was as likely to hear as Latin pop coming from stereos and sound systems in the tourist town of Antigua. Banda Blanca were from Honduras, and their silly ode to a standard Honduran national dish (I was taught that "caracol" meant snail, but apparently it can refer to any mollusk) was the breakthrough punta hit of the 1990s. Like most such, it was of course seen by devotees of the form as a childish bastardization for degraded mass tastes; which is of course the most pop thing of all about it.

Listening to it today, I'm not exactly whisked back to my early youth — it was only in the air, it never reached me emotionally then — but I am moved to dance, to whoop along, and to reflect guiltily on how many opportunities for knowledge, understanding, joy, and human connection I missed by being a self-involved, self-important American teenager. There are only a few other big Spanish-language hits I remember noticing from those years, but a glance at the list says they won't be troubling us. I'll probably manage to talk about them anyway, whether here or elsewhere; in self-involvement and self-importance, at least, I haven't changed.
Posted by Jonathan Bogart at 17.6.10

Newer Post Older Post Home
Subscribe to: Post Comments (Atom)
Welcome to my beach party. Sorry if there aren't enough drinks to go around, hope you brought your own.
I'm writing here in my official capacity as a music nerd. I have no other qualifications. Catch me on Twitter and my website if you want to see what I write about when I'm not writing about this.
If you know the music I'm talking about, please join in. Más gente, más gusto. If you don't, that's okay. I'm encountering most of it for the first time too. Give a listen and share your impressions.
Spanish encouraged but not required. Corrections eagerly sought. No glass containers. Remember to dance.
Oh, I almost forgot: I stole the idea from Tom.