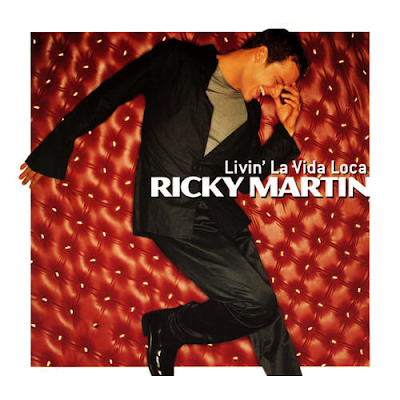 "Give a little more vibe on the track, please..."

I probably crow too often about new realities, new beginnings, new usherings-in of the present era. Reality is manifold; newness begins over every wave. Yet it feels more accurate than ever to say that the millennium begins here -- at least the millennium seen through the specific lens around which this blog is oriented.

It's not the first Hot Latin #1 to also hit #1 on the Hot 100, not by a wide margin (Los Lobos was twelve years ago), but it does introduce a new sense of intimacy between the two charts. Crossover between them will still be rare, but not quite so rare; even if specific songs aren't familiar to both audiences, a good many artists will be. There was a deal of hype the summer of 1999 about a Latin Invasion (which consisted of about three songs), but apart from Tony Concepción's Irakere-imitating trumpet towards the end, there's little that's particularly Latin about "Livin' la Vida Loca."

Indeed, with its whirlwind velocity, rubbery surf guitar, and energetic horn charts, it actually has more in common with that other cod-tropical vogue of the late 90s, third-wave ska, than with anything specifically Puerto Rican. Which is part of the point, both of Martin's crossover pop and of this whole travelogue: Latin identity is not -- cannot be -- tied to some travel-brochure stereotype of UNESCO World Heritage frozen-in-amber cultural practice. Latin people live in the present tense, and Latin pop is modern pop; whatever and whenever that is.

Desmond Child, the producer of "Vida Loca," made his name with the shiny gloss of Bon Jovi and Aerosmith's late-80s hair metal, and that sense of compressed power gives the track its grab-you-by-the-shirt-front immediacy; an important stage in the loudness wars, it was the first all-ProTools hit, electronic even in its Dick Dale gibber, the punchy horns and skittering drum as influenced by the noisy, jungly end of drum 'n' bass as by Child's rock background.

And the lyrics position it directly in Anglophone rock history, the woman who is living the vida loca one with all the brown sugars and witchy women and maneaters that thirty years of guitar-driven misogyny have chronicled. But Martin's performance has none of the spitefulness of a Jagger; he rather admires her rapaciousness than otherwise, and why not? With this production behind him, he's easily able to keep up with her. (And besides, he's not her target. But that's later history bleeding into earlier.) Once more, it's the beginning of the modern era: hedonism presented not as warning temptation or as knowing deviance, but as the basic premise of pop music. EDM, at least in the popular imagination, starts here too.
Posted by Jonathan Bogart at 14.4.14