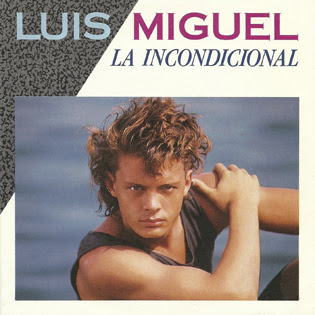 This project has really been testing my patience with the Big Ballad, the single song form which I have to work harder to appreciate and, appreciation won, have less desire to revisit, than any other. I'm hardly alone: the single most widely-hated song of the last twenty years (at least among respondents with pretensions to youth and cool) is "My Heart Will Go On," and I'm willing to bet a fair few of you who clicked play on the song above had to resist the impulse to turn it off at the mere sound of that glassy electric piano. (Or maybe you didn't resist.)

The first listen through, it took all my attention just to find things to like in the recording; and those watery flecks of guitar in the chorus, punctuating the beat like a slow-motion skank, helped. On the second and third listen I began paying attention to the lyrics: there's some worrying gender politics at work there (though I think the worry is in the response to the song rather than in the song itself, which like all good pop presents an unbroken fictional narrative), which I'll get to in a bit. This most recent go-round (watching the high-production and largely perplexing video) (maybe if I'd ever seen Top Gun it might make more sense), I focused on Miguel's voice.

He's certainly got one. This is the kind of Big Ballad which would be intolerable with a weaker set of lungs behind it (Michael Jackson, for example, couldn't pull off its plodding directness — he'd need a lot more key changes and skittering rhythm), and while Miguel isn't exactly operating in the bel canto tradition there's a long and proud lineage of belters in Latin Pop to which he is undeniable heir. It was in fact his Today I Am A Man moment, the song with which he graduated from the teen-pop where we last saw him to the big leagues represented (in the 1980s at least) by Juan Gabriel, Julio Iglesias, and José José. As if to mark the moment definitively as an irrevocable step, he cut his hair. The windblown mane on the cover of the album was what fans were expecting, his signature look for the past ten years; but the slick power-coif in the video was what they got.

If he was to sing with the big boys, he also had to share their complexities: no more puppy love songs or simplistic kiss-offs, but oddly tortured dramas in which he acknowledges having preyed on an angelically faithful woman without expressing regret beyond a shrug: "No sé por qué." (I don't know why.) She was always the same, unconditional in her love, making no demands of him, and his response? "No existe un lazo entre tu y yo/No hubo promesas ni juramentos/Nada de nada." (There is no bond between you and I/There were no promises or vows/Nothing at all.) All delivered, of course, with a passion just short of tears, which rescues the cold-hearted son-of-a-bitch lyric and places it in a familiar context: the trifling man who realizes too late, etc.

But I wonder about the response to the song. It was a massive hit, firmly establishing Miguel among the all-time greats of Latin Pop — the decade to come will more than anyone's be his, as far as this travelogue is concerned — and Wikipedia's brief list of covers far outpaces any other song we've seen here save "La Bamba." It's become something of a standard, in effect, but unlike similar Big Ballads in Anglophone pop around the same time (say, by Richard Marx or Bryan Adams), it's not much of a love song, unless you consider praising a woman for faithfulness despite her man's being a dick romantic. Was it heard as a love song? There's no doubt that Latin American gender norms don't quite match up to the egalitarian utopia that Anglophone pop (yes, even hip-hop, in its way) tends to assume. Just something to keep in mind as we hurtle towards the present.
Posted by Jonathan Bogart at 29.3.10